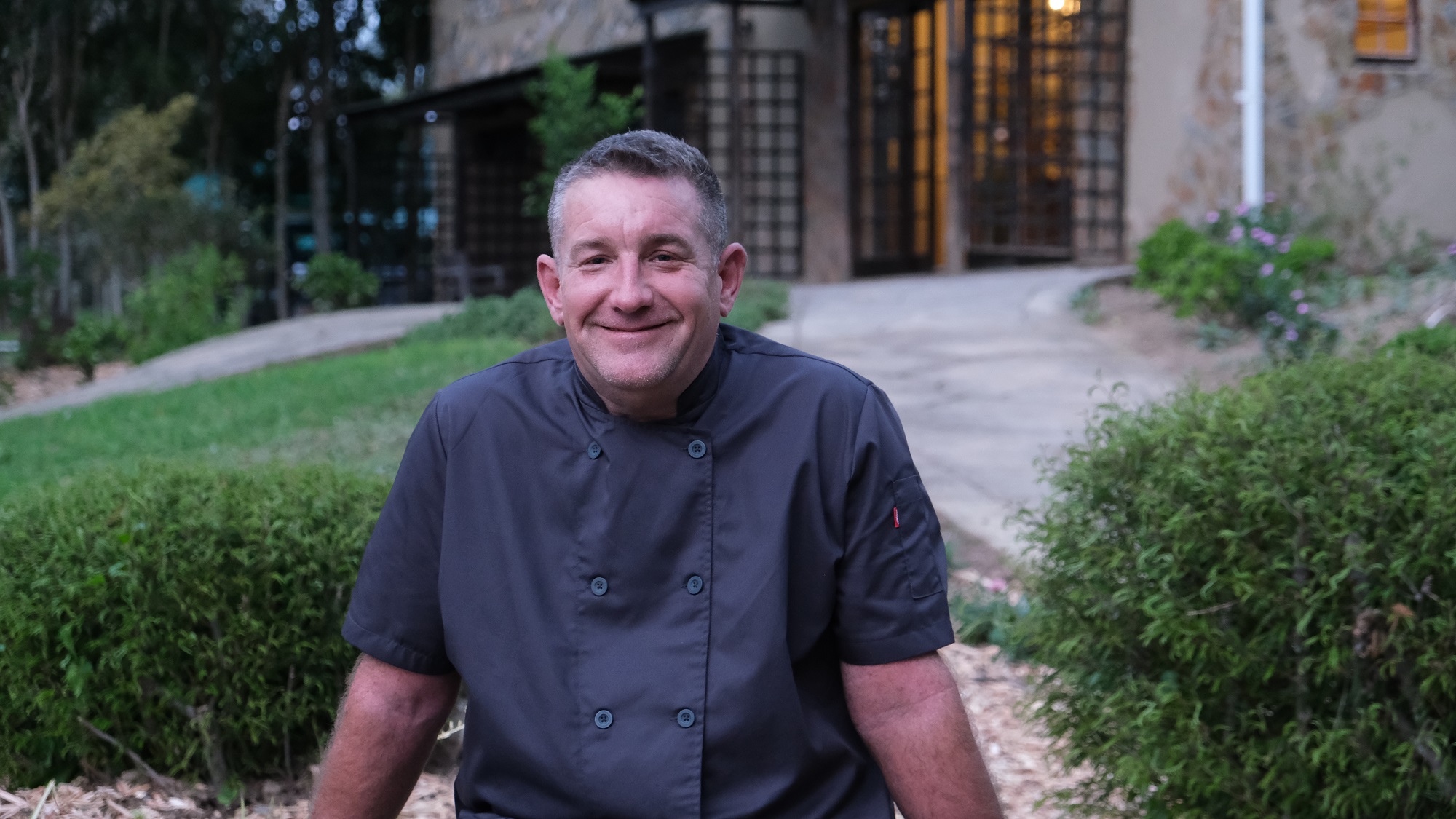 “Comfortable, nostalgic and unpretentious,” is how executive chef and co-owner Desmond Morgan describes the Cowshed, the new restaurant at Portland Manor Country Hotel where he has spent the last few months overseeing renovations and planning new menus for its opening on 21 June. “Everything about the Cowshed fits into my ethos of simple farm to table food in a beautiful setting,” he enthuses.

The setting is the historical 212 hectare Portland farm in Rheenendal, just outside Knysna which is now under new ownership and management. The restaurant is perched above the manicured lawns of the estate adjacent to the recently refurbished hotel and looks out across the Lawnwood Dam to the Outeniqua Mountains. It’s a rustic building with exposed trusses in the double volume interior and quarry tiles on the floor. The doors open wide onto a sunny terrace anchored on each end by two wood-burning ovens which will take centre stage in the preparation and delivery of Desmond’s new menus.

It’s a departure from his normal style of cooking, but fire-based cooking has been his vision for years and he’s delighted to finally be able to bring it to life, with artisanal pizzas, fire-grilled chicken and rump steak, and glazed pork belly.

“Dining at Portland is an experience,” he explains. “The chefs are cooking for you, in front of you. There’s no more placing orders on a docket and disappearing into the kitchen. You’re engaging directly with your chef and giving instant feedback. It’s laidback, interactive cooking and I’m excited about the whole concept.”

The menu itself is small and seasonal. Desmond has made an effort to meet local produce suppliers and believes it’s important to support them. “We’re in this together. The journey of discovery of local farmers and suppliers gets me excited. All around us are fruit and nut orchards, dairies, and artisans. My wooden items are all being made by a local craftsman. All our produce comes from local fruit and veggie shops if not from our own garden, local butcheries, and dry store companies.”

Unsurprisingly, Desmond’s own food preferences are simple and wholesome. “I love great bread, cheeses, Italian anti pasti, and Karoo lamb. And I treat myself with yoghurt. I don’t have a favourite restaurant, but Iearn from home cooks, grannies and especially farmers’ wives.”

Desmond has had a long and interesting career in the hospitality industry, starting in 1994 when he completed a full apprenticeship at the Mount Nelson hotel in Cape Town. “I have had the opportunity to work in bush lodges, city and country hotels in the capacity of either executive chef, general manager or food and beverage director. My all-round experience has given me a good understanding of the hotel business from back to front of house.”

Most recently Desmond was an executive team member and complex executive chef at Fancourt Hotel in George where he was responsible for the food and beverage offerings across the entire resort, managing 12 kitchens, including back of house.

At Portland he has a team of just nine people including chefs, cleaners and front of house. Deboné Keswart, a Knysna local who previously worked at The Turbine Boutique Hotel is front of house supervisor. Najma Abukar is a passionate and creative chef with extensive knowledge of fine dining and everything in between, including pastry making and baking. With her strong leadership skills, she will oversee the day to day kitchen operations at The Cowshed.

Married to Jolene for eight years, Desmond has three children who keep him busy on his off days. When he has time, he pursues his interest in target shooting and reloading, and painting landscapes. He is also a part-time Boer goat and Meatmaster sheep farmer with a great love and passion for the Karoo and dreams of one day setting up a restaurant there.

History of The Cowshed at Portland Manor

The history of Portland Manor dates back to 1819 when George Rex, who was once rumoured to be the illegitimate son of King George III of England, bought a portion of Leeuwenbosch farm (De Poort) from Salomon Terblanche and renamed it Portland.

After George Rex’s death in 1839, his properties were put up for sale under the terms of his will and Portland was bought by Thomas Henry Duthie. In 1842, Henry Barrington, 12th son of the 5th Viscount Barrington, arrived in the Cape and journeyed to Knysna. He brought with him lavish household items from England, which included a grand piano and a chandelier, and was on the lookout for the perfect home in which to place them. He purchased the Portland farm from Duthie and set out to transform the estate into a “very perfect place”.

In 1863, Henry Barrington built the farm’s first house, styled after the manor houses of England, with a traditional cow byre. Unfortunately, both were badly damaged in the Great Fire of 1869, but repairs began immediately, and the cowshed was completed in 1874 with an iron roof replacing the original thatch. In later years Bunny Newdigate’s Jersey cows were milked there but it was upgraded by her grand-nephew and previous owner Frank Newdigate Peter into a restaurant named The Pack House. Taking it back to its heritage, the present owners of Portland named their new eatery The Cowshed.

Our Women’s Day ladies’ lunch at The Cowshed E